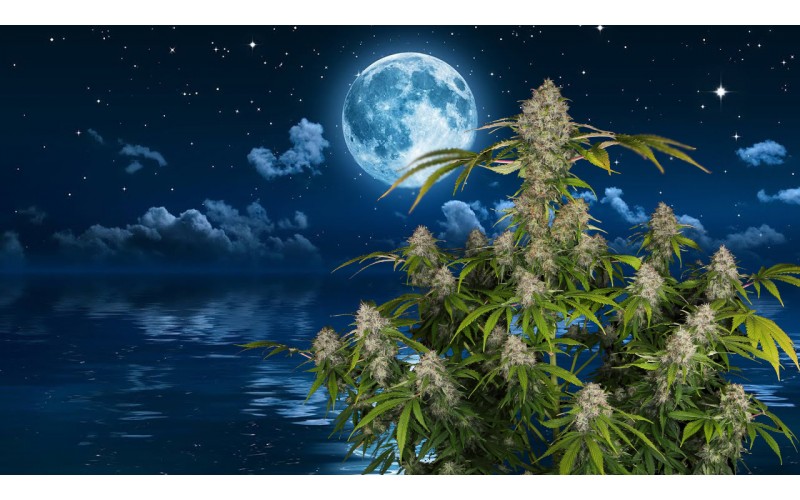 If you are wondering when to start planting marijuana according to the moon, this post is of interest to you! In our online grow shop we explain it in detail.

How does the moon influence marijuana cultivation?

The moon influences the tides, animals and plants, and when we talk about plants we also include marijuana crops.

There are people who still think that the influence of the moon on plants is nonsense or that they don't even pay attention to it, I will tell you that we have come across cases of people who haven't germinated any seeds, or who have had strange plants, etc. And there have been cases in some years where incredible plants have come out. This may be due to genetics, but it's also very likely to be due to the influence of the moon, not only at the time of germination, but also during transplanting, pruning, cutting and even harvesting.

The moon has several cycles and phases, below we explain the most important phases for cannabis cultivation and how to identify each of the phases.

To know the exact moment to germinate seeds, when to prune, when to make cuttings, fertilise or even harvest, we need to know how the lunar cycles affect cannabis plants, so here we go!

We call the new moon the moon that shines the least brightly. At this time the illuminated part of the moon isn't visible from the earth, as the moon is located between the earth and the sun.

In this phase the moon begins to grow and light up, increasing the power of its rays. Along with this lunar movement, the sap of the plants will begin to move, rising from the roots to the stems and branches.

In the northern hemisphere the crescent moon is D-shaped.

In the southern hemisphere the crescent moon is C-shaped.

We call it a full moon when the moon is fully illuminated, during this phase the sap of the plants will be more active, focusing more on the upper parts of the plants.

At this stage, the moon begins to wane and lose its brightness. At this time the sap begins to move less and starts to descend again towards the stem and leaves below, although the sap has not yet reached the roots, it is at this time that the roots develop.

In the northern hemisphere the waning quarter moon is C-shaped.

In the southern hemisphere the waning quarter moon is D-shaped.

When to prepare the substrate according to the moon?

It's ideal to prepare the substrate between the waning and new moons, preferably on a descending moon.

When to germinate moonseed 2023?

It's ideal to germinate marijuana seeds a few days before the full moon, preferably on a descending moon.

What is the moon for transplanting?

Planting and transplanting should ideally be done on a waxing or full moon, preferably on a waning moon.

When to prune according to the moon?

Pruning should ideally be done during a waning or new moon, as the plants will suffer less. Preferably on a waning moon.

When to cuttings according to the moon?

The best time to cut cuttings is when the moon is waxing and waning, preferably when it's at the top of the moon. This way the cuttings will be stronger and more effective.

When to fertilise according to the moon?

If we fertilise with biological fertilisers, we should ideally fertilise on a new and waxing moon, preferably on a waning moon.

If we use mineral fertilisers, we should ideally fertilise on a waning moon, preferably on a descending moon.

When is it best to harvest according to the moon?

The best time is on a crescent or full moon, never on the same day as a full moon. Preferably on an ascending moon, if there is a risk of fungal diseases, better on a descending moon.

On a waning moon we will obtain harvests with more flavour and smell.

To prevent pests and diseases according to the moon, preventive products are applied as follows:

- In spraying: On waxing and waning moon.

- In irrigation: In waning and descending moon.

In waning and descending moon.

To plant marijuana you have to go through several phases or stages, below, we will show you when you can do each of the stages. How to prepare the soil, when to germinate the seeds, when to fertilise, when you can make cuttings, etc.